One of my enterprise customers, Heineken, challenged me a year ago with the question if it was possible to replace the current PPM tool (6 years of history, used centrally for 700 resources) with a global one where also the related operation companies have to participate in. The PPM tool was a full functioning point solution for project and portfolio management. In addition, the tool has two business critical interfaces; one to SAP and one to Power BI for financial dashboards. Of course, the request was including a replacement of the mentioned interfaces and in addition, a PPM process for operational companies had to be in place at go-live.

Oh, and BTW, can it be ready within 6 months? And so, from here the journey begins.

The customer demand
· The customer was looking for more insights related to portfolios and programs but there was no single source of truth;
· Within the landscape of the customer, there was a growing demand on more visibility in the project and programs they were executing. They wanted to be able to prioritize better so they could invest in programs that add the most value to the company;
· The head office functions and operating companies were looking for a tool to manage portfolios, programs and projects. However, no standard was available, resulting in several separate local tool developments worldwide;
· There was a lot of scattered information between business and IT. Therefore, this generated a need for one system with both IT and business information available to create an end-to-end picture.

What have we done to select the tool? – Q3 2019
· We conducted 20 interviews with stakeholders from operating companies, regions and the head office about their current way of working and their needs;
· A questionnaire was sent to all IT Managers and global service managers;
· We had alignment meetings with several product teams;
· There was a architecture alignment meeting with the Enterprise Architects;
· We held 3 live tool demo’s with ServiceNow and two competitors;
· We did a tool demonstration and a lessons learned from operating companies on their Microsoft implementation.

The choice was ServiceNow ITBM – Why?
ServiceNow has an intuitive interface, which will increase the user experience, and it is future proof. Our ITBM implementation will be on the same instance as the current ITSM module. This will make it possible to integrate ‘run’ with the ‘change’ organization. Furthermore, the tool aligns with the IT strategy (reapply tools and simplify architecture platform). The supplier shows a high ambition level in their roadmap which means they will keep investing in the platform. Good example is the fact that full AGILE integration is on the roadmap for dependency management.

The platform/module is easy to configure which means customer is less dependent on the supplier and changes are applied faster.

The planning
After the decision for ServiceNow as ITBM platform, three of the 6 month went by but still a Go Live with the MVP on the planned date was feasible in our opinion. With only 3 months to go!

In Q1 2020 we immediately started with planning sessions and the dismantlement of the old tool.

For the Go Live, still panned for April 1, we had defined an MVP. In 6 sprints of two weeks we were working towards a technical go live at the beginning of March, which gave us a “full” month for testing, training, UAT, documentation and rework. Ambitious but still achievable. 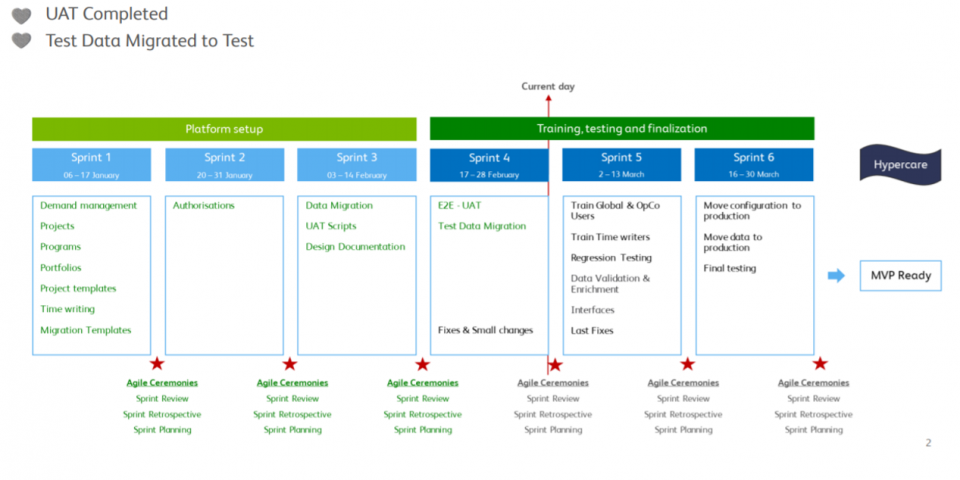 Masterdata
Essential for a migration of this size is having the master data in order. In addition, we have to determine in advance, where the master data will be maintained. Good example is the user information; in this  particular case the data is maintained in Active Directory and synchronized by a LDAP sync job. Perhaps even more important was structuring the master data from the other systems, which will be phased out. The vast majority of the data came from the predecessor of ServiceNow; Clarity PPM. But more had to be done than simply rebuilding the Clarity functionality. Data also had to be transferred from various other sources such as Microsoft Project, but also from manual processes with spreadsheets.

Design Principles
· User Experience is key!;
· Only add functionality that adds value;
· Stay out of the box, no customizations;
· Customer needs need to work on a global scale.

Migration
Before the technical migration, we had frozen the existing systems two weeks before Go Live. People still were able to see their PPM data but it was no longer allowed to modify existing schedule plans and time writing had to be performed upfront.

That provided us a ‘comfortable’ two weeks to migrate the data from Clarity to ServiceNow, performing a UAT and arrange the end user training. The UAT was very well organized and the participants took their role more than seriously. We used the following test strategy:

· Tests are separated into standard steps per specific role;
· UAT users impersonate a specific user for each test run (Impersonate function provided real added value during UAT);
· Tester chooses a user that matches the test scenario that he or she needs to run;
· Start running the ‘happy flow’. Afterwards user can test non-logical inputs and test to see if it’s fool proof;
· Scripts and feedback are managed in Microsoft Forms. Results will be monitored online by the Product team;
· Defects will be stored in ServiceNow and fixes are shared accordingly.

Not only the ‘Happy Flow’ was tested thoroughly but, more important, also various ‘Unhappy Flows’. The UAT resulted in a few ‘minor’ defects that could be solved fast and easy. Good preparation by the development team.

The process below shows the complete flow from demand to closed project. In contrast to the previous ppm tool, in ServiceNow we start the process at demand level instead of the project level for new projects. Projects that were migrated from the ‘old’ PPM tool and the existing ideas from the operating companies were entered as projects directly in ServiceNow.

Integrations
Integration to SAP was postponed to May. Reason of the movement was that during development it was clear that the current interface used with Clarity was not sufficient. A new integration was built in Dell Boomi via the ServiceNow Integration Hub. With some manual spreadsheet uploads lucky enough we were able to have a successful ‘Month End’ procedure where all PPM data was entered correctly in SAP. Before the end of May the automatic interface to SAP was also ready. That prevented us from a second manual upload to SAP.

Integration with Power BI was already delivered at MVP Go Live. Instead of the Clarity O-Data interface we made use of Performance Analytics reports in ServiceNow and from there we automatically transported this data to Power BI where it, combined with SAP financials, resulted in nice and up-to-date dashboards.

Next Steps
The Go Live went very smooth and no major issues occurred. End users were satisfied with the look and feel of the tool and impressed by the fact that all Clarity data persists in ServiceNow. For the next sprints the PPM Mobile interface, the JIRA interface and enablement of more operating companies are on the list.

The core team
We made this huge project possible with a very small but dedicated team. The success factor was the stringent planning and the agile way of working during this project. Everyone took his or her responsibility and impediments had been solved very fast and in a satisfying way. Beside myself the team exists of Steve Hollander from Heineken as product owner, Gerard van Lier from Heineken as scrum master, Ton Nijland and Sankhadeep Dhar from Odysseus as development team. Hafid Ahhanay performed the QA role on behalf of the vendor. It was an honor and pleasure to contribute to such a successful project with a great end result. 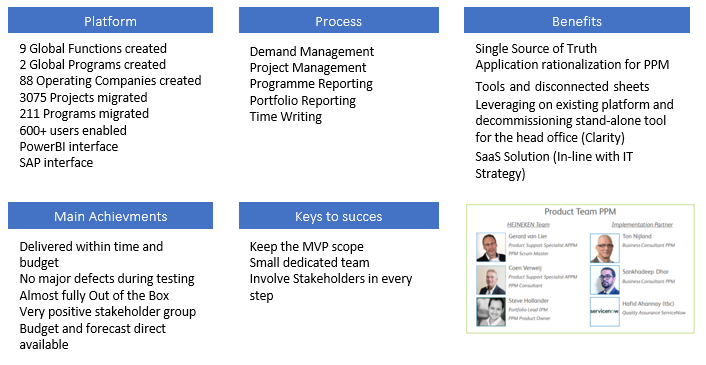